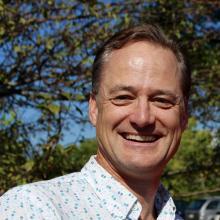 He became a follower of Jesus at Occidental College at the end of his freshman year in 1986.  A group of InterVarsity students made a safe place for one crazy freshman to explore Jesus- and he's forever grateful for them.  After graduating, he worked at UCLA for 10 years, learned how to contextualize the Gospel, tried a million crazy things and most of them failed.  Since then, he's served as the Los Angeles Divisional Director and as the Regional Director for Southern California.

A writer and teacher, he focuses on the alignment of the gospel and racial reconciliation, postmodern evangelism, and leadership development. He and his wife have served in both Korean-American, and African-American church contexts. He is based in Los Angeles and graduated from Fuller Seminary. He is a coauthor of Being White, I Once Was Lost, and Breaking the Huddle. Breaking the Huddle is Outreach Magazine's "outreach resource of the year" (2018).

He is a father of three, and has coached all of their soccer teams. Doug's personal goal is to play ultimate-frisbee 3 times a week.

Faking It Instagram Proxe
Skeptics and seekers love our invitation to be more real. No one wants to be fake. Use this Instagram resource to invite others into a radically honest and authentic community..
+ Add to Backpack
Small Group Invitation to Faith
Inviting your friends to follow Jesus is the one of the most significant things you can do to see decisions of faith on your campus. Use this resource to help you explain the gospel and invite a response.
+ Add to Backpack
Faking It (GIG)
Our non-Christian friends don’t need us to have all the answers, but they do need us to be real with them. This 4-week God-Investigation Group (GIG) series allows us to explore Jesus and be more real about our needs with one another.
+ Add to Backpack